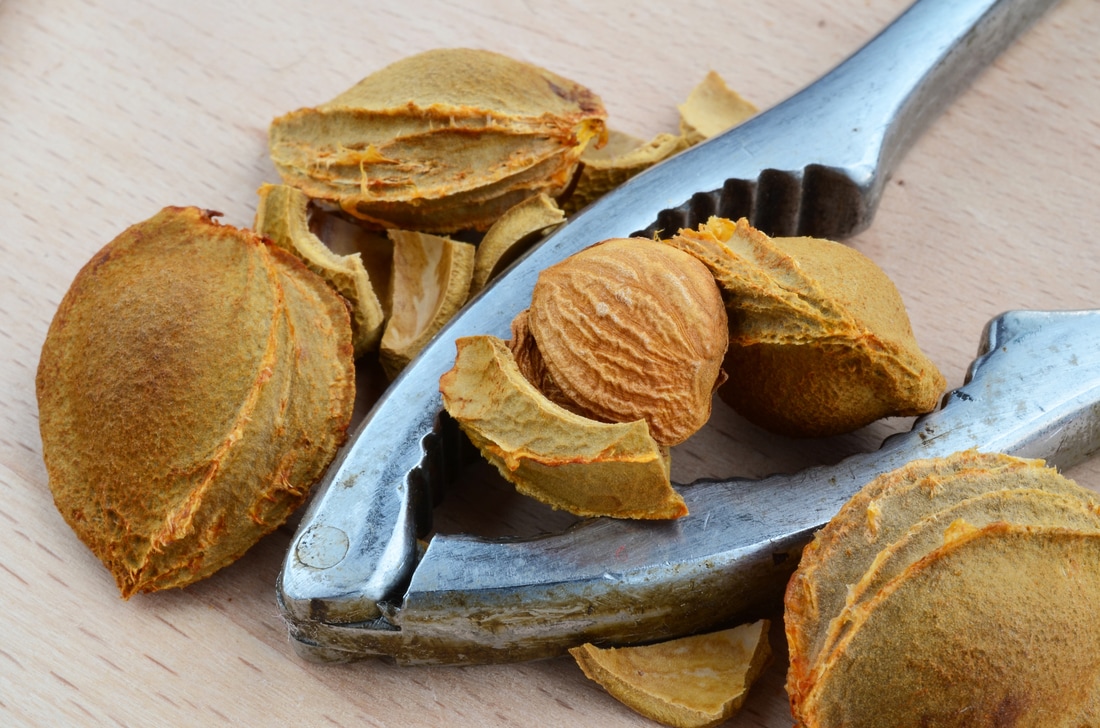 Vitamin B17 is also known as Laetrile or Amygdalin. It is a concentrated form of bitter apricot kernels. When you eat an apricot (or a peach), crack open the pit, and you'll find a kernel in there. That kernel kills cancer! But it MUST be of the "bitter" variety for it to work. Vitamin B17 was discovered by Dr. Krebs Jr. back in the mid 1900s. Drs. in the 70s were successfully using B17 to treat cancer patients, but their practices were shut down by the FDA and those doctors were jailed. Two of these stories can be found in the following books: ALIVE AND WELL by Binzel and LAETRILE CASE HISTORIES by Richardson.
The Cyanide Scare

Because I'm not very eloquent at explaining science, I'm simply going to quote from the book WORLD WITHOUT CANCER by G. Edward Griffin.

One of the reasons I got off the B17 (and my cancer returned when I did), is because of the CYANIDE SCARE. I feared taking it because it might kill me. Well, after reading Griffin's book, I learned how B17 works, and discovered that there's no evidence of ANYONE ever dying from taking B17 (while there's evidence of MILLIONS dying from chemo; and had I gotten back on the chemo, I would be dying right now too).

So, with that said, I hope the following will help you understand how B17 works, but more importantly, relieve your fears. Oh, and this might help too. I've been on the B17 for 3 1/2 months now, and I'M FINE!!! If anything, I'm BETTER than I was BEFORE B17 because now I'm CANCER FREE!

UPDATE: I've been taking B17 for four years now, celebrating four years in remission back in October of 2016.

There is only one substance that can unlock the B17 molecule and release the cyanide. That substance is an enzyme called beta-glucosidase, which we shall call the "unlocking enzyme."When B17 comes in contact with this enzyme in the presence of water, not only is the cyanide released, but also the benzaldenhyde, which is highly toxic by itself. ....

There is another important enzyme called rhodanese, which we shall identify as the "protecting enzyme." The reason is that it has the ability to neutralize cyanide by converting it instantly into by-products that actually are beneficial and essential to health. This enzyme is found in great quantities in every part of the body except the cancer cell which, consequently, is not protected.

Let us examine what, at first, may appear to be exceptions to these rules. We have said that the unlocking enzyme is not found to any dangerous degree anywhere in the body except at the cancer cell. That is true, but note the phrase "to any dangerous degree." The unlocking enzyme actually is found in various concentrations everywhere in the human body. It is particularly prevalent in the healthy spleen, liver, and endocrine organs. In all of these instances, however, there also is present an even greater quantity of the protecting enzyme (rhodanese). The healthy tissue is protected, therefore, because the excess of this protecting enzyme completely neutralizes the effect of the unlocking enzyme.

The malignant cell, by comparison, not only has a greater concentration of the unlocking enzyme than found in most normal cells but it is totally lacking in the protecting enzyme. Thus, it is signularly vulnerable to the release of cyanide and benzaldehyde.

The non-cancerous organs, therefore, are endowed by nature with the unique capacity of protecting themselves and even nourishing themselves from the digestion of the B17 molecule, whereas cancerous tissue converts the same vitamin substance into powerful toxins against which it has no defense.

... Other experiments have indicated that the trace amounts of cyanide and benzaldehyde released in the mouth and intestine, far from being case for panic, actually are a part of the delicate balance of nature and serve entirely beneficial purposes. In the mouth and stomach, these chemicals attack the bacteria that cause tooth decay and bad breath. In the intestines they interact with the bacterial microflora to suppress or eliminate the flatulence long associated with westernized foods.

... Commenting on the question of the possible toxicity of Laetrile, Dr. Burk has summed it up with this emphatic statement:

With forty-five years of study and research on the cancer problem, the last thirty-three years in the U.S. National Cancer Institute, and with files of virtually all published literature on the use of amygdalin ("Laetrile") with reference to cancer, and with innumerable files of unpublished documents and letters, I HAVE FOUND NO STATEMENTS OF DEMONSTRATED PHARMACOLOGICAL HARMFULNESS OF AMYGDALIN TO HUMAN BEINGS AT ANY DOSAGES RECOMMENDED OR EMPLOYED BY MEDICAL DOCTORS IN THE UNITED STATES AND ABROAD.

Dr. D.M. Greenberg, Professor Emeritus of Bio-Chemistry at the University of California at Berkeley, and consultant to the Cancer Advisory Council of the California Department of Public Health added this note of concurrence:

THERE IS NO QUESTION THAT PURE AMYGDALIN (LAETRILE) IS A NON-TOXIC COMPOUND. This is not questioned by anyone who has studied the reports submitted to the Cancer Advisory Council of the State of California.

Each year in the United States, over ninety people die from aspirin poisoning. NO ONE EVER HAS DIED FROM B17.

In another series of tests, white rats were fed seventy times the normal human dose of Laetrile, and the only side-effects produced were greater appetite, weight gain, and superior health; just what one would expect from taking a vitamin.

We can't believe everything we read on Wikipedia and places like that. Do more thorough research (legitimate research) than a few minutes of Internet surfing.

I know all about what places like that say about B17 and Dr. Krebs who discovered B17, and who’s works are still referred to in scientific journals TODAY.

NO ONE MADE MONEY on the fake studies they conducted at Sloan Kettering, where they lowered the doses of the Laetrile so it wouldn’t work.

“Dr. Ian MacDonald and Dr. Henry Garland [also] wrote the famous 1953 report of the California Medical Association that since has become the basis of almost all scientific opposition to Laetrile/B17. It was learned later, however, that the findings on this report had been FALSIFIED. Both of these doctors defended cigarette smoking as a harmless pastime unrelated to lung cancer. Dr. MacDonald had publicly stated: ‘A pack a day keeps lung cancer away’" (World Without Cancer pg. 129). And here was God's justice: Dr. MacDonald died in his bed from one of his cigarettes, and Dr. Garland died from lung cancer (obviously he didn't truly study B17 or he would have used it).

I nearly DIED THREE TIMES from our FDA approved poison . . . er . . . I mean chemo. The nurses had to put on robes and gloves while putting it in my veins because if any got on their skin, it would burn right through. They approve that, but not a simple apricot kernel. Sadly, the FDA does not have our best interest in mind. They make more money off chemo than anyone has ever made on an apricot seed.

Also, some have issues with calling B17 a vitamin. Dr. Krebs, a biochemist, who discovered B17 calls it a vitamin, so that’s why I call it that. I've been on B17 TWICE, and each time it KILLED my cancer. And I'm on it now, and I'm fine. Never been better, in fact!

Also, according to the TRUE studies of B17, NO ONE has EVER DIED from it. No one can count the amount of people who have DIED from chemo.

All I can say is GENESIS 1:29, GOD HIMSELF APPROVED OF HIS SEEDS! We NEED to EAT them! So DO YOUR HOMEWORK! I've had two years of study on this, desperately trying to SAVE MY LIFE. And believing in the LIES the FDA wants to tell us about B17 (because it won't make them any money--an apricot seed can't be patented) will only put more lives in danger. I repeat GENESIS 1:29! I believe what God tells me to do, and I'm gonna eat His wonderful seeds.
​